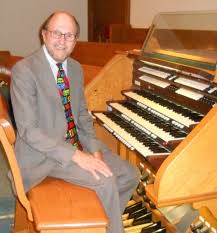 Richard E. Frey is a native of Bethlehem, PA. He earned a Bachelor of Music degree at Westminster Choir College, Master of Music from Boston University, and Master of Arts in Religious Education from Palmer Theological Seminary in Philadelphia. He has served as Minister of Music at churches in Binghamton, NY, Wayne, PA, Ridgewood, NJ, and Hanover, PA. Since January of 2011 he has been the Director of Music at the Unitarian/Universalist Congregation of York, PA. He has presented organ recitals at St. Patrick’s Cathedral and the Cathedral of St. John the Divine in New York City, the West Point Cadet Chapel, and at Musikfest in Bethlehem, PA. He twice accompanied Peter, Paul, and Mary at the Great Auditorium in Ocean Grove, NJ. He served as organist for a National Convention of the National Council of Churches, and served on a Worship Planning Committee in Geneva, Switzerland for the World Council of Churches. In 1987 & ’88 he gave recitals across the country to benefit Bread for the World, earning $10,000 for the organization. To celebrate the 25th anniversary of those recitals, he will present recitals in 2012/13 to benefit organ funds, scholarship funds, social outreach concerns, disaster relief, and other such causes. Dick has made 6 recordings of organ music. As a composer, he has 26 published works. Dick is a member of the Harrisburg and York Chapters of the American Guild of Organists. He served as Dean of the Northern NJ Chapter of the Guild, and was Program Chairman for the Region II Convention of the AGO in 1989. He received the Alumni Merit Award from Westminster Choir College, and was chosen for Liberty High School’s “Hall of Fame”. Dick is married to Susan Dotterer Frey, also a graduate of Westminster Choir College. The Freys have 3 children, 3 grandchildren, and lots of pets!