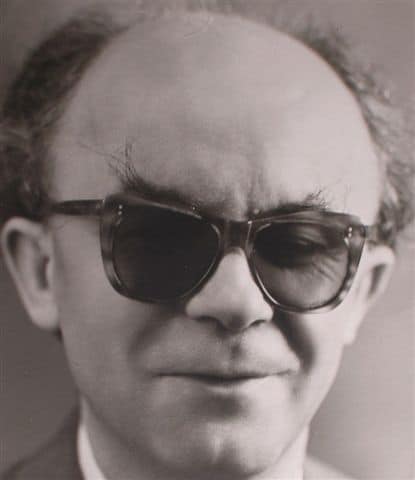 Born on February 15, 1907, in La Fontenelle, Brittany, France, a small village near by the Mont Saint-Michel, Jean Langlais became blind from the age of two.

Sent to the Paris National Institute for the Young Blind in 1918, he studied piano, violon, harmony and organ with great blind teachers among other Albert Mahaut and Andre Marchal.

Later, he entered the Paris National Conservatory of Music in Marcel Dupre organ class, obtaining a First Prize in 1930. In 1931, he received the “Grand Prix d’Execution et Improvisation des Amis de l’Orgue”, after having studied improvisation with Charles Tournemire. He ended his studies with a Composition Prize in Paul Dukas class at the Paris Conservatory in 1934.

Professor for forty years at the National Institute for the Young Blind, he also taught at the Paris Schola Cantorum where, between 1961 and 1976, he influenced both french and foreign students.

In 1945, he became the successor to Cesar Franck and Charles Tournemire at the prestigious organ tribune of Sainte-Clotilde in Paris. He left that position in 1987 at the age of 80, having been titular for 42 years.

A great recitalist, he played more than 300 concerts in North America. A prolific composer, his catalog of works comprises 254 opus numbers (organ, vocal and instrumental music).