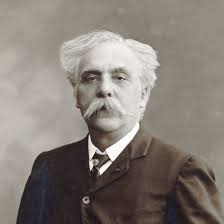 Fauré’s musical abilities became apparent at an early age. When the Swiss composer and teacher Louis Niedermeyer heard the boy, he immediately accepted him as a pupil. Fauré studied piano with Camille Saint-Saëns, who introduced him to the music of Franz Liszt and Richard Wagner. While still a student, Fauré published his first composition, a work for piano, Trois romances sans paroles (1863). In 1896 he was appointed church organist at the church of La Madeleine in Paris and professor of composition at the Paris Conservatory. In 1905 he succeeded Théodore Dubois as director of the conservatory, and he remained in office until ill health and deafness forced him to resign in 1920. Among his students were Maurice Ravel, Georges Enesco, and Nadia Boulanger.

Fauré excelled not only as a songwriter of great refinement and sensitivity but also as a composer in every branch of chamber music. He wrote more than 100 songs, including “Après un rêve” (c. 1865) and “Les Roses d’Ispahan” (1884), and song cycles that included La Bonne Chanson (1891–92) and L’Horizon chimérique (1922). He enriched the literature of the piano with a number of highly original and exquisitely wrought works, of which his 13 nocturnes, 13 barcaroles, and 5 impromptus are perhaps the most representative and best known. Fauré’s Ballade for piano and orchestra (1881; originally arranged for solo piano, 1877–79), two sonatas for violin and piano, and Berceuse for violin and piano (1880) are among other popular works. Élégie for cello and piano (1880; arranged for orchestra, 1896), and two sonatas for cello and piano, as well as chamber pieces, are frequently performed and recorded.

Fauré was not especially attracted to the theatre, but he wrote incidental music for several plays, including Maurice Maeterlinck’s Pelléas et Mélisande (1898), as well as two lyric dramas, Prométhée (1900) and Pénélope (1913). Among his few works written for the orchestra alone is Masques et bergamasques (1919). The Messe de requiem for solo voices, chorus, orchestra, and organ (1887) did not gain immediate popularity, but it has since become one of Fauré’s most frequently performed works.

Although he had deep respect for the traditional forms of music, Fauré delighted in infusing those forms with a mélange of harmonic daring and a freshness of invention. One of the most striking features of his style was his fondness for daring harmonic progressions and sudden modulations, invariably carried out with supreme elegance and a deceptive air of simplicity. His quiet and unspectacular revolution prepared the way for more sensational innovations by the modern French school.