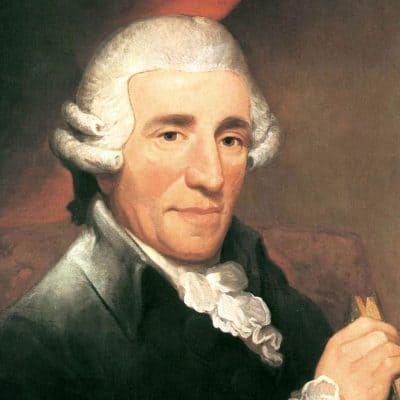 Franz Joseph Haydn (1732–1809) was an Austrian composer, one of the most prolific and prominent composers of the Classical period. Haydn wrote 107 symphonies in total, as well as 83 string quartets, 45 piano trios, 62 piano sonatas, 14 masses and 26 operas, amongst countless other scores.

The son of a wheelwright and a local landowner’s cook, Haydn had such a fine voice that at the age of five he entered the Choir School of St Stephen’s Cathedral in Vienna.

His ethereal treble tones lasted until he was 16, a fact noticed by the Habsburg Empress, Maria Theresa, who uttered her famous criticism: “That boy doesn’t sing, he crows!”. Haydn left the choir in memorable fashion – snipping off the pigtail of one his fellow choirboys – and was publicly caned.

By the 1770s, Haydn’s music had become more distinctive and boldly individual, inspired by a form of heightened emotionalism known as ‘Sturm and Drang’ (storm and stress). The composer’s reputation spread rapidly throughout Austria, and commissions began arriving from abroad.

1790 saw the death of Prince Nicholas Esterházy, Haydn’s employer since 1762, and the musically indifferent Anton became the new Crown Prince. Haydn moved to Vienna and accepted an invitation from the great German-born violinist and impresario, Johann Peter Salomon, to visit England (1791-1792), where he found himself adored.

Prince Anton Esterházy died in 1795, and his successor, Nicholas II, requested Haydn’s return to Esterháza. A lover of church music, Nicholas set Haydn the task of composing a new setting of the mass every year.

In 1804, Haydn retired from Esterháza, and illness effectively prevented him from any further composition. During May 1809, Napoleon reached Vienna, but Haydn stayed there, guarded respectfully by two of the invader’s sentries.