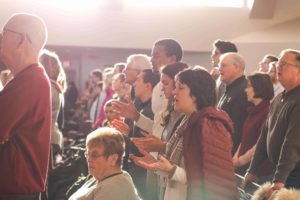 A choir is defined as a group of singers combined in a musical ensemble to create a single musical piece. Music written specifically for a choir to perform is called choral music. The word choir is easily interchangeable with the terms chorus, however, the term choir is most often affiliated with a church, while the term chorus is more likely to be associated with musical ensembles that perform in large theaters or concert halls.

While these associations exist, however, the terms are hardly confined to them. In reality, the actual term choir is quite broad. Choirs may perform a variety of music and are not limited to any specific genre. It is not uncommon to watch a common choir perform any piece ranging from classical to popular music. Choirs may sing without any instrumental accompaniment (commonly referred to as acapella), with a piano or organ, with a small ensemble, or with an entire orchestra that could include anywhere from 70 to 100 musicians.

The structure of choirs is quite simple. The ensemble is led by a conductor or choirmaster, who directs the singers with hand, arm, and face gestures. Most choirs consist of four separate sections to sing a four-part harmony. This structure is not rigid and there can be an infinite amount of parts, as long as there is at least one singer to sing each part.

This is a Fred Bock Publishing Group site designed to provide information about our publishing company’s imprints.