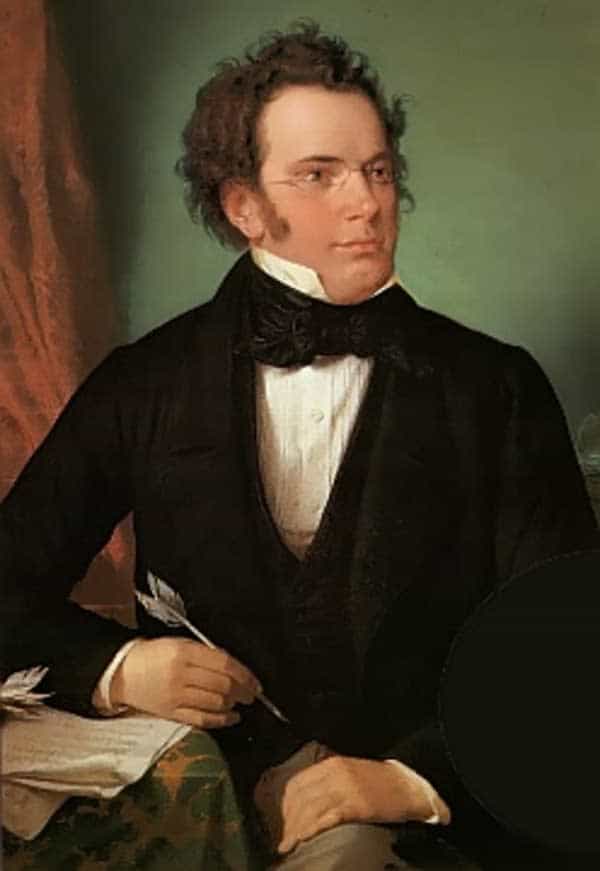 Franz Peter Schubert (31 January 1797 – 19 November 1828) was an Austrian composer of the late Classical and early Romantic eras. Despite his short lifetime, Schubert left behind a vast oeuvre, including more than 600 secular vocal works (mainly Lieder), seven complete symphonies, sacred music, operas, incidental music and a large body of piano and chamber music. His major works include the Piano Quintet in A major, D. 667 (Trout Quintet), the Symphony No. 8 in B minor, D. 759 (Unfinished Symphony), the three last piano sonatas (D. 958–960), the opera Fierrabras (D. 796), the incidental music to the play Rosamunde (D. 797), and the song cycles Die schöne Müllerin (D. 795) and Winterreise (D. 911).

Born to immigrant parents in the Himmelpfortgrund suburb of Vienna, Schubert’s uncommon gifts for music were evident from an early age. His father gave him his first violin lessons and his older brother gave him piano lessons, but Schubert soon exceeded their abilities. In 1808, at the age of eleven, he became a pupil at the Stadtkonvikt school, where he became acquainted with the orchestral music of Haydn, Mozart, and Beethoven. He left the Stadtkonvikt at the end of 1813, and returned home to live with his father, where he began studying to become a schoolteacher; despite this, he continued his studies in composition with Antonio Salieri and still composed prolifically. In 1821, Schubert was granted admission to the Gesellschaft der Musikfreunde as a performing member, which helped establish his name among the Viennese citizenry. He gave a concert of his own works to critical acclaim in March 1828, the only time he did so in his career. He died eight months later at the age of 31, possibly due to typhoid fever.

This is a Fred Bock Publishing Group site designed to provide information about our publishing company’s imprints.